This project was funded by The Fair Share Trust.

In December 2010, we received £9, 479.50 to deliver a project based around engaging the hard to reach young people in the local area to tackle grot spots on Langley. 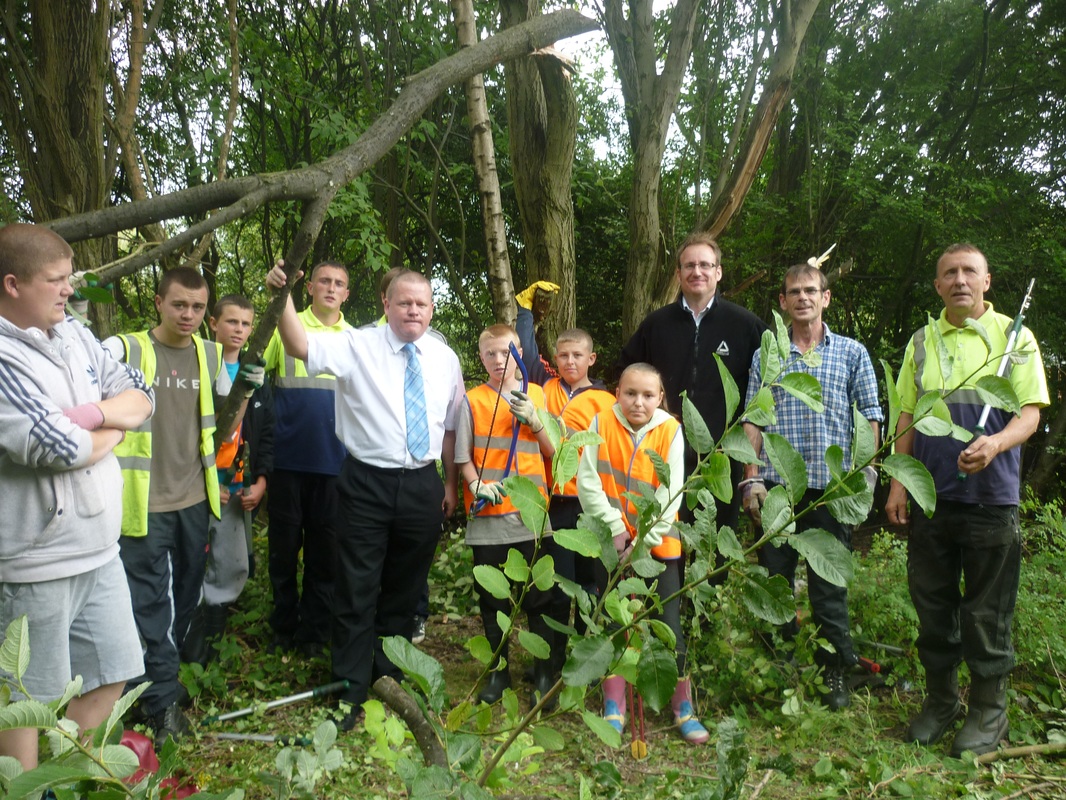 They funded a Youth project co-ordinator for 12 months to engage 15 hard to reach young people. Terry Smith was recruited as a self-employed youth worker, his job was to engage the young people, then with their input identify 3 pieces of land on the Estate that was run down and derelict and bring them back to life. Terry has 20 years in youth work and was trained as a youth worker by Rochdale Metropolitan Council.

As an ex- offender he was already known for his work by lots of young people, some of them had seen his work over the years and so had grown to respect the way that he had turned his life around by becoming a youth worker and they knew he
wanted to ensure that other young people didn’t waste their lives by getting involved in petty crime and anti-social behaviour.

So Terry was obviously the best man for the job.

Terry, along with 15 young people, identified 3 plots of land on Eskdale Gardens, Latrigg Crescent and Mosedale Road. The first thing Terry did was contact groundwork Trust to see if they could offer any qualifications or training/skills to our young people, and they agreed. And all together 10 young people gained qualifications in LvL 2 volunteering in the community and for some this was their first ever qualification.

So in partnership with ground work Trust we set about working on Eskdale Gardens and eventually this piece of land was created into a beautiful place where all the surrounding community got involved in working together.

The Latrigg Crescent land was a massive project to undertake the land was huge and we needed extra cash to develop this land. So Terry and his wife Sue attended a local environment meeting to discuss the ideas they and the young people had. At the meeting it was decided to set up a group who could help with the project. Terry chaired the group and Sue got to work with ground work trust and they applied for £60.00 from Community spaces. In the meantime Sue also met with Housing Market Renewal and they funded a ground clearance project which came to £12,000 they equipped the young people with wellies and tools and they gave a helping hand in clearing out the land.

We now have a fantastic area where everyone from the community can work rest and play together. We have 19
allotment plots where people come and work on the allotments.

We have just applied to the Lottery for funding for a training cabin to be placed there where young people can train outside and on the plot in woodwork, joinery and other outdoor activities

The poly tunnel on the land is called the Nipped In the Bud poly tunnel . The Leisure garden has its own website that is in the process of being published.

So without the funding from The Fair share trust. The Langley Community Leisure garden may never have been
born.

No job too small!, from trimming a bush to laying a brand new lawn! We are a community project that works in partnership with Riverside Housing association. Being community focused project that is supported by volunteers, funders and social enterprise, we are able to offer unbeatable value for money, especially for the disabled or the elderly, simply give us a call today to get a free no obligation quote! We’ve got your garden problem covered

Learn new skills in a fun and friendly environment with support from Riverside housing. Indoor and outdoor activities are available with access to various training and tools. Whether you are looking to meet new people or simply improve or learn new skills to boost your employability, it’s easy to get involved, give us call now! You have nothing to lose and everything to gain

Bringing it all together

Volunteers and our expertise, training and support often comes together in perfect harmony by offering extensive discount services for the elderly or disabled people. This way of working quit simply brings it all together and gives a real sentiment to the meaning of ‘local community’ and ‘working together’ We really appreciate and respect our volunteers and they also get a great deal out of working with us.